Maharishi Mahesh Yogi is the Founder of the Transcendental Meditation (TM®) program and Maharishi Light Technology with Gems.

In 1959 Maharishi Mahesh Yogi left the Himalayas and came to the West to teach the Transcendental Meditation technique. Today over six million people worldwide have learned this simple, natural, and effortless technique for relieving stress and bringing balance to the mind, body, and spirit.

In the 1980s Maharishi began meeting with experts in the science of Ayurveda, the traditional health system of India. As a part of his revival of this ancient wisdom, Maharishi restored consciousness as the foundation of Ayurveda. He then introduced the knowledge and practice of Maharishi AyurVeda* to the western world. Maharishi also inspired and guided Joachim Roller to develop Maharishi Light Technology with Gems as an important modality of Maharishi AyurVeda. 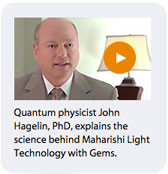